A Cambodian woman, Sokia, found her way to the Center. Blood tests showed that Sokia suffered from diabetes and high lipids (cholesterol). Sokia needed a radical change in diet and lifestyle. 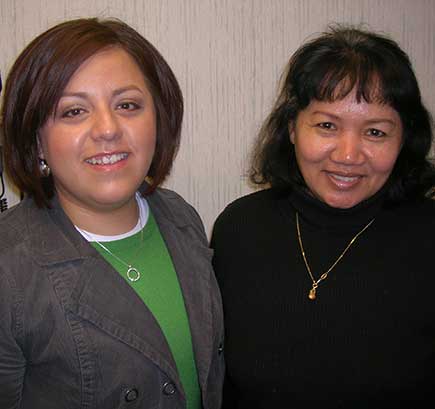 Arely Perez is the Center’s Patient Educator. The gifts Arely brings to her work include dedication, humor, accessibility, and a complete facility in both English and Spanish. Unfortunately, however, Arely is not able to speak a word of Cambodian.

Finally, Arely was reduced to speaking very slowly in English. Arely gave Sokia brochures and carefully explained how to plan meals. Sokia replied with questions and comments in Cambodian. Both women nodded their heads in response to each other, but Arely knew she understood nothing of what Sokia said and feared that it was the same for Sokia.

Or was this true? As Sokia chattered in Cambodian, Arely had the fleeting sense that she actually understood something of what Sokia had just said. Arely guessed that Sokia was talking about rice. But how could this be?

Arely’s first thought was that she was hallucinating. How could she be hearing Spanish from a woman who barely spoke a word of English? Desperate, however, Arely tried her next sentence in Spanish.

With palpable relief, the women discovered that they could communicate quite effectively in Spanish.

Arely’s next question was where did Sokia learn Spanish? In Cambodia?

The Cambodian immigrant in Goshen learned Spanish because most of the people at her work place were Hispanic immigrants.